Whilst having a hard drive clear out I found photos of some figures painted a couple of years ago. There are some Crusader Miniatures Normans and the rest are from the Front Rank ranges covering the Hundred Years War (1337-1453) and Wars of the Roses (1421-1487). Links to manufacturers at the foot of the page.

Firstly a set of Bannockburn themed horsemen, depicting various of the protagonists from 1314. They all found happy new tabletops on ebay. 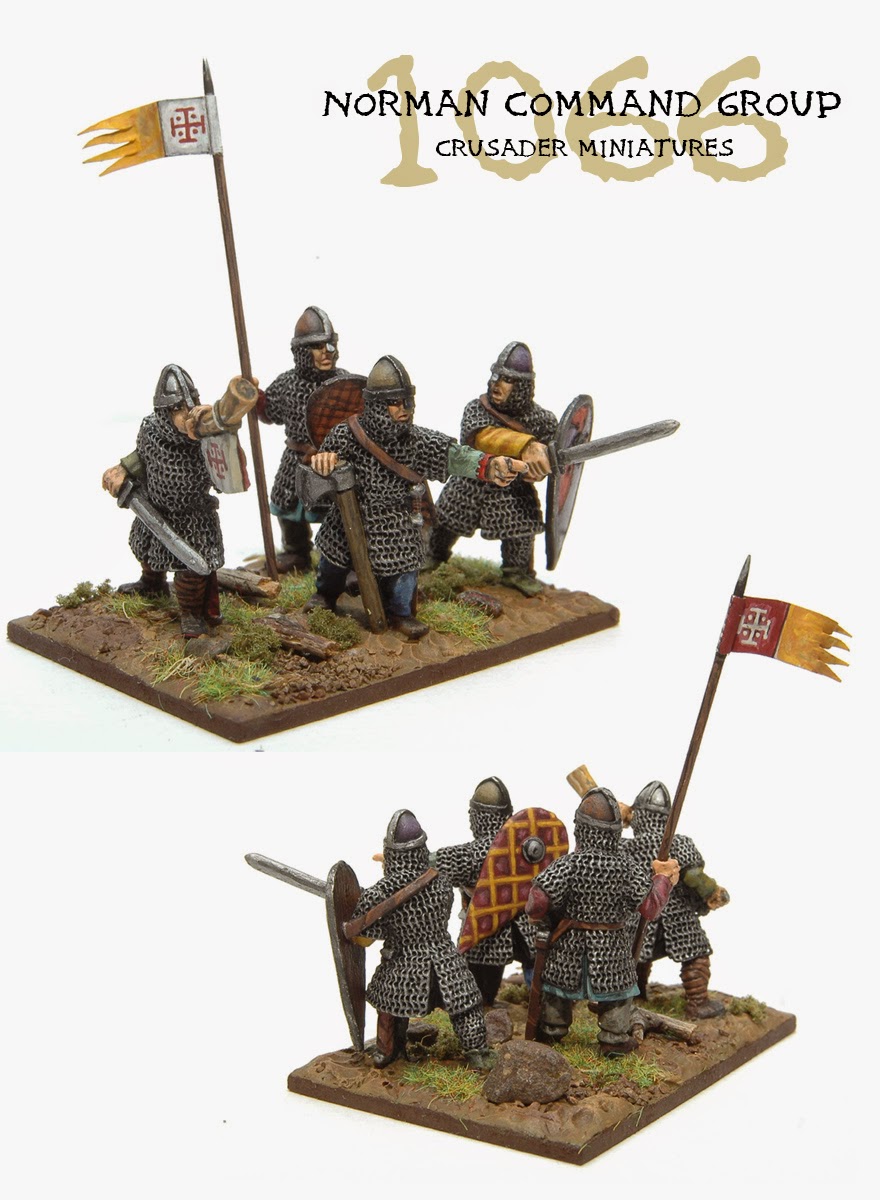 King James II of Scotland with his standard bearer and herald.  Known as 'Fiery Face', due to a large birthmark which covered most of the left side of his face, James II spent the greater part of his short life feuding with the Douglases. It's a fascinating period in Scottish history. This is the first of a few scenes in the conflict I hope to model.

The King is with his herald, the March Pursuivant and standard bearer Sir John Scrymseor, Constable of Dundee*. In the background is Threave Castle as it is today, then the stronghold of the Black Douglases in the South West and the scene of their last stand in 1455.

* Please note that I am not entirely sure of the titles for James II's herald and standard bearer at this time. It's an educated guess based on the sources available to me. Please let me know if it's wrong! 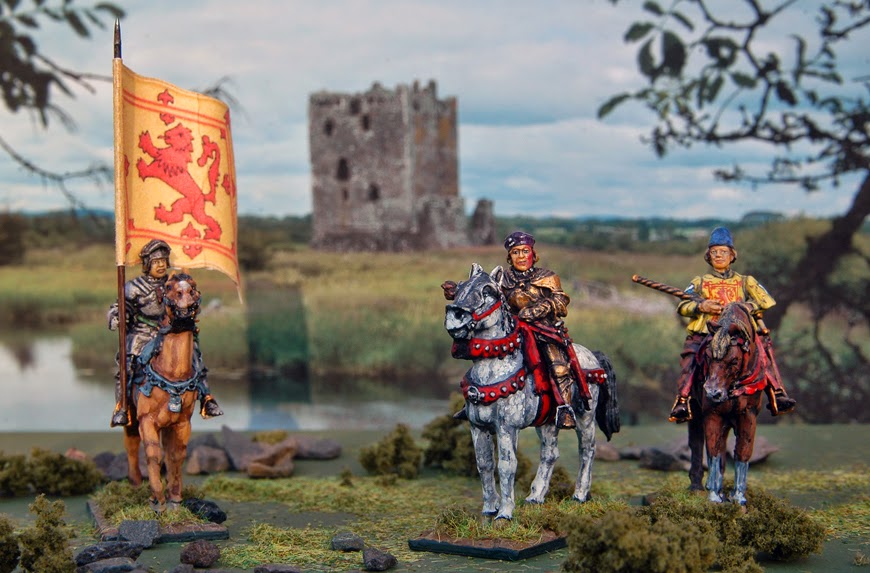 Six hundred years have passed since the Battle of Agincourt, so I thought I should paint some archers as a tribute. Perry Miniatures released their Agincourt period English Army plastic figures at the tail end of last year. I'll be adding to this one as I go along...

The great thing about plastic figures is that they are easily converted. One of the arms on the frame has a broken bow and coupled with a bit of butchering and glueing I came up with a two finger salute.
"I've broke me bow, but uppeth yours anyway!" Opinion is divided on the two finger salute theory, but it will make a nice figure. He's next for painting. 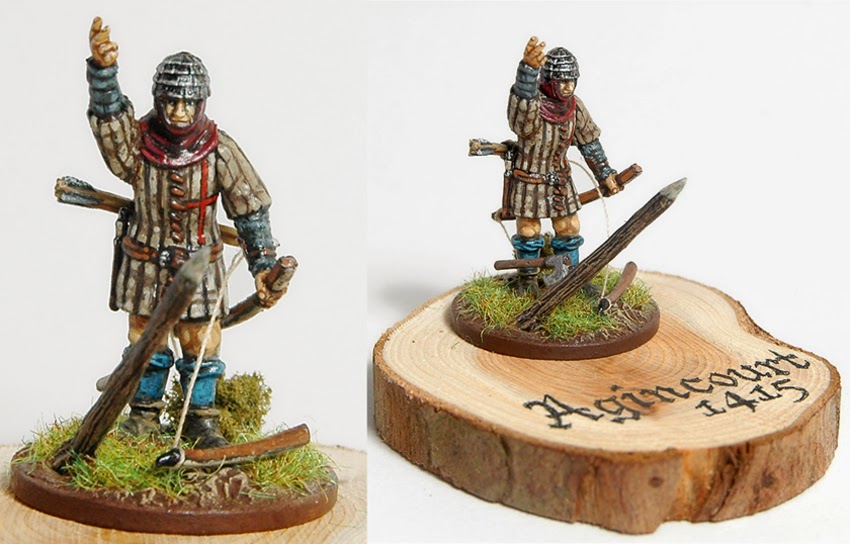 What can I say, medieval archery, well it's a special interest of mine. I probably paint more archers than anything else. Here's some Wargames Foundry figures from a while back. 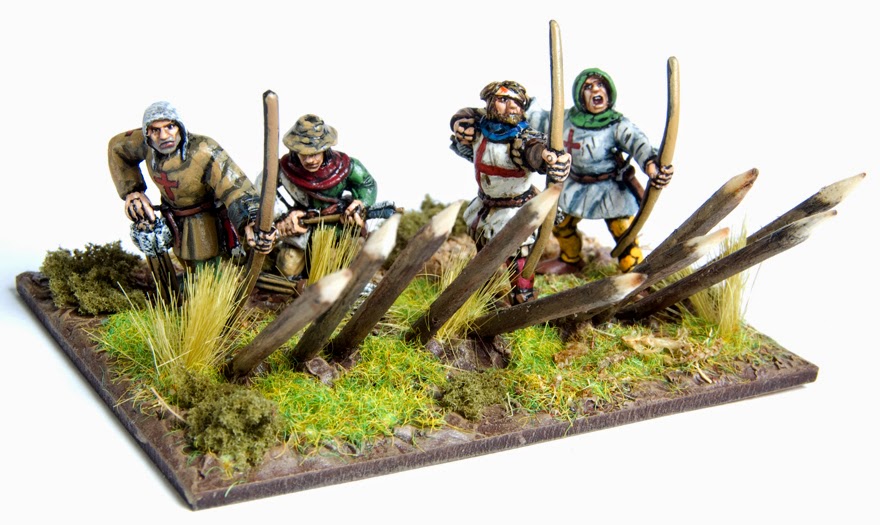 This blog is about my on and off passion for painting little medieval soldiers. 28mm scale is very popular with gamers and collectors. There is a huge selection of manufacturers, and as many historical and fantasy ranges as you care to mention. I have dabbled with figures from the Jacobite Rebellion, Napoleonic and WW2 periods, but this blog will concentrate on 15th/16th century. I will predominantly be using Perry Miniatures figures. 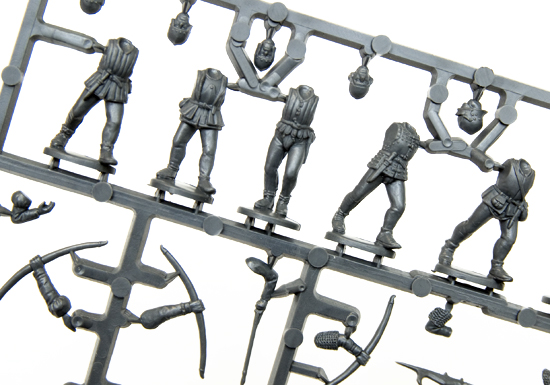 During this late medieval period the battlefield was changing with the increased use of black powder weapons, both 'handgonnes' and 'ordonnance' - guns and cannons to you and me. Depending on their nationality, armies favoured different weapons and developed their tactics to fit those weapons. The English relied on 'bows and bills', the Scots favoured the spear, but used bows and crossbows too. Both were keen on the new fangled artillery.
Posted by Unknown at 09:57 No comments:

The Battle of Linlithgow Bridge 1526

Another big part of my medieval life is Rusty Bodkins, which provides historic display archery with 'have a go' sessions for clients in the heritage industry.

I'm always looking for new ways to engage the visitors and I came up with the 'Bolts & Bodkins' box, which will essentially be a multimedia display, including the use of model dioramas. This is one I have completed, representing the Battle of Linlithgow Bridge in 1526. It's designed to underline the changing face of the late medieval battlefield. The archers and crossbowmen are still providing a screen for the foot soldiers and men at arms, but with the addition of black powder weapons.

Figures are a mixture of Perry, Dixon and Redoubt miniatures.

The battle was a fairly significant encounter, and like many engagements in Scotland during the late medieval period it was fought over control of the crown.
More information can be found at: