A long overdue new project! Scratch building with mixed media once again; cardboard tubes, pizza boxes, foam core, card, paper etc. Like being a child again, it's great. The subject is a medieval poivrière, or pepperpot tower of the kind found widely throughout France on castle and town fortifications. 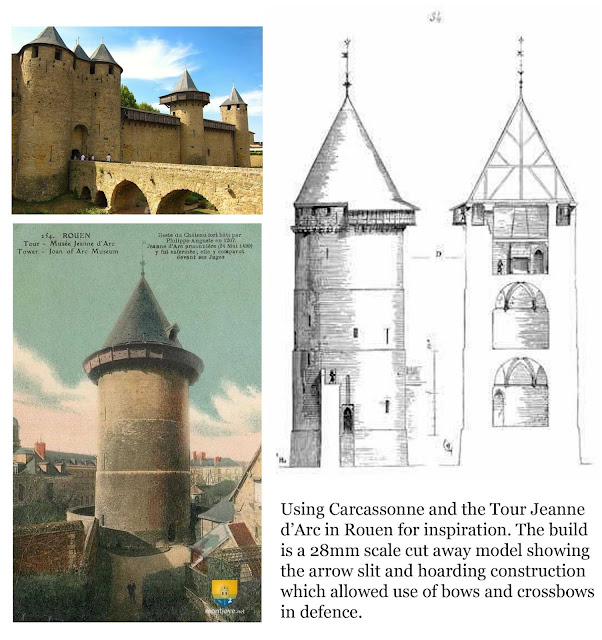 The basic form of the model is a small cardboard tube inside a bigger one, to give a wall thickness of roughly 3 metres. Then it gets complicated. I'm presenting it with cut aways to show the interiors.  Firstly a section through one of the arrow slits on the ground floor, then a mid level passageway linking the wall walks. The first floor will be the same vaulted space as the ground floor, and will not be cut away. The roof itself will have a section cut out to show the top floor battlement level. There will a wooden hoarding, or fighting platform running round the top of the tower, as shown above.

The model is effectively built from rubbish, or things that I have collected because they 'might be useful some day'. These are the the basic card postal tubes which form the inside and outside of the wall.

I have a splendid book called Ancient Monuments and their Interpretations which has a chapter on Usk castle in Wales. The ground plan of the Garrison Tower showing the principal points for arrow slit embrasures is shown below. Curiously similar to the fletchings on an arrow. These designs change from castle to castle, but the triple point system is often found in circular towers. This model will have three embrasures and a doorway at ground level. 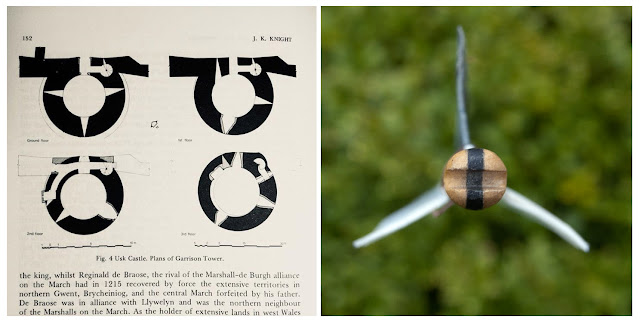 It's one of those projects where there are bursts of activity and then lots of non activity. Thinking about it, then doing something, then changing it again! I had to scratch my head a lot before committing to wielding the Stanley knife and finally starting to make cuts. 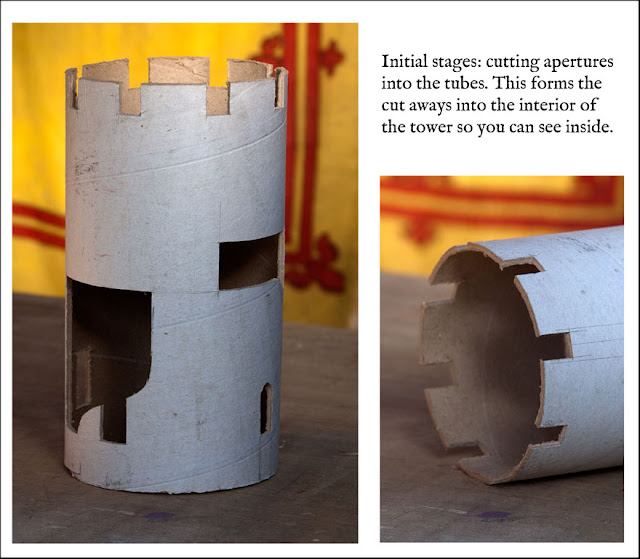 The next stage is the vaulted ceiling of the ground floor inside the interior tube, a full height space where longbows could easily be used, and of course crossbows too. The ribs are thin cuts of card tube and the infills are sandpaper sheets. I finished it with some corbels made from mounting card and cotton bud stems. Then the whole thing got a coat or two of spray paint. 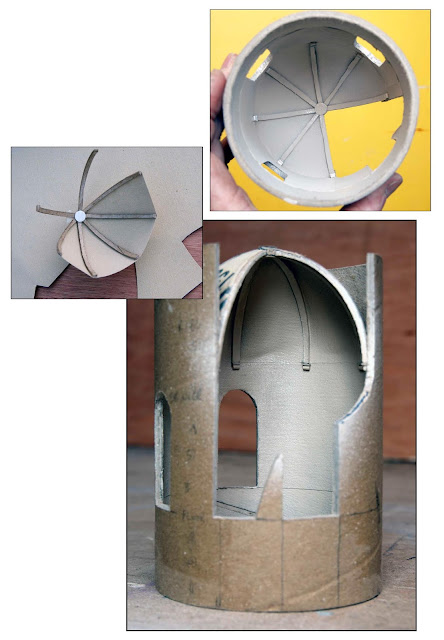 The internal tube will eventually be fixed inside the external one and the two will have to be reconciled in some way, that is the gaps in the cut away sections being covered with card or paper. This is a complicated part of the build, getting everything lined up, particularly the openings for the arrow slits on both tubes. 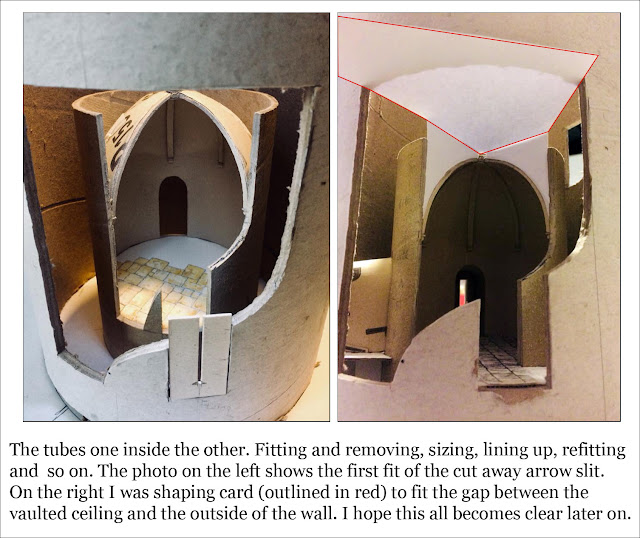 On the previous card model I used photographs  of the actual walls at Threave to decorate it. This time I decided to use basic water colour techniques for the stonework, just a wash or two of light grays and then lining in with a .5 fine liner pen.  We'll see how it looks. Think the floor looks okay so far. Here's a Facebook video....

For my sins I intend to have part of the spiral stair showing in the mid section cut away. This is basically a low, timber beamed room which forms a passageway between the wall walks. I have been attempting a spiral stair build from foam core and styrene rod. And wine. It was a very tricky thing to make, is slightly too small (but never mind), and I can only stand in admiration of the real castle builders of yore. 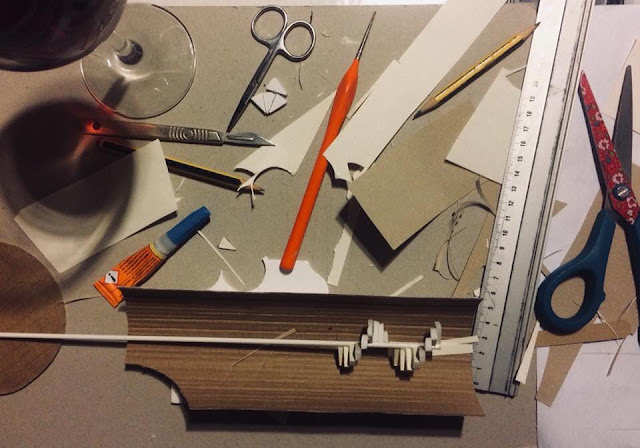 Pesky arrow slit embrasures. They are arched at the top and they slope downwards slightly from inside tube to outside tube.  There's no way to cheat them since they can be seen in the ground floor. So this is what they look like. Formed with pizza box, mounting card and sand paper. This is the bit in the gap between the tubes.... 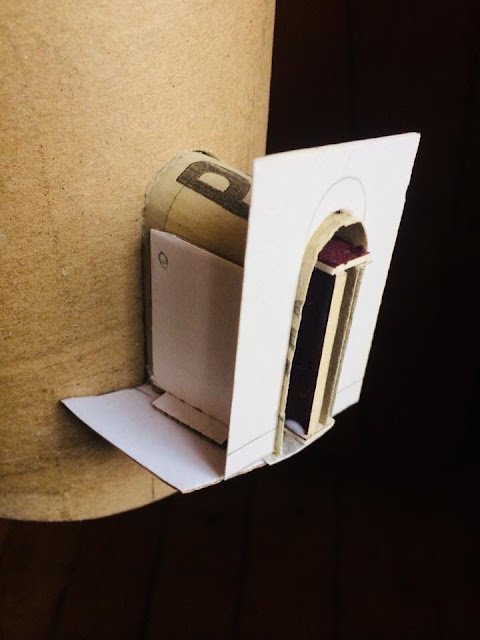 ...and this is what it looks like inside the ground floor. 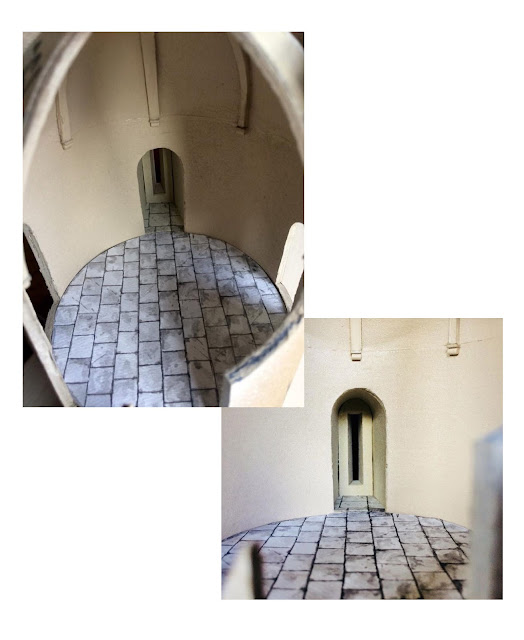 I do enjoy the process of scratch building, but the best part is bringing it to life with figures. I mainly use 28mm www.perry-miniatures.com figures. The time frame for the model is early 1420's so the Agincourt range is perfect, both metal and plastic.


I had some metal crossbow archers on my chaotic painting bench so they were first to get some paint sloshed on them. They are represented with composite bows, potentially up to 600lbs draw weight, variously spanned with belt hooks or windlasses.